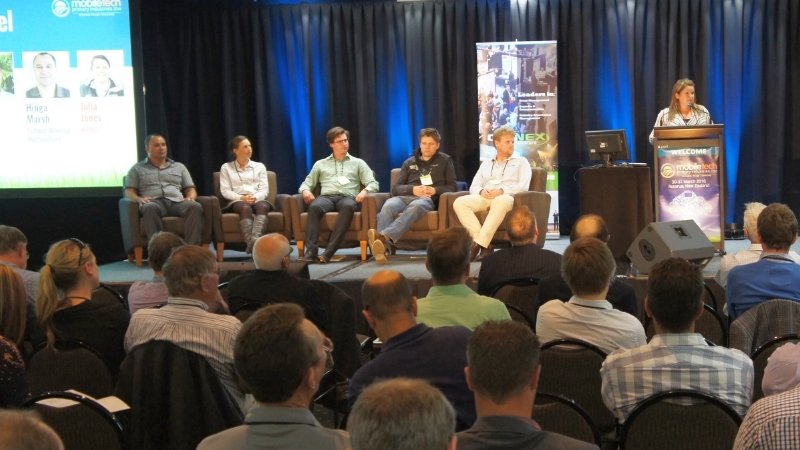 One of the key features of the MobileTECH event run for New Zealand’s primary industries last year was a Meet the Future Leaders Panel. “This included some of the brightest young people working currently within the sector” says MobileTECH Programme Manager, Ken Wilson. Those attending the event heard of their vision of how technology was going to play a major role in shaping their businesses over the next 10 years.

The panel will once again be a major part of MobileTECH this year.

“Technology is rapidly becoming a critical part of how businesses are run in the primary sector. It’s also an essential factor in growing, retaining and attracting the best young leaders within the industry”, said, Ken Wilson. “The young leaders panel is an opportunity to hear from the young innovators and early adopters of this new technology and how they see if being employed now in the future,” he said.

We are pleased to announce that the MobileTECH 2017 young leaders session will include Alastair Neville, Chelsea Millar and Andrew Hutchinson.

Alastair Neville is a 3rd generation dairy farmer from Reporoa. He is a young farmer passionate about NZ Agriculture and the opportunities new technologies bring to the farm. Alastair also believes in giving back to the community and has been heavily involved in running a number of Young Farmer of the Year competitions.

Chelsea Millar is a passionate young leader who is on the national board of NZ Young Farmers and operates her own business called Grass Roots Media NZ. She is a 2015 Kellogg Rural Leadership graduate, Women of Influence finalist for the Business Enterprise and Rural categories, and was recently named in the Top 10 finalists for the University of Auckland Young New Zealander of the Year.

Andrew Hutchinson won the 2016 Young Horticulturalist of the Year. It was a gruelling two-day challenge that tested the skills needed by modern horticulturalists, including working with innovation and leadership. Andrew is based in Pukekohe and is the technical support advisor for potatoes at AS Wilcox & Sons.

“Each panellist brings a completely new dynamic to MobileTECH. We and the industry are really looking forward to hearing their views on technology and the role that this plays in building the industry’s next generation”, said Mr Wilson.

This panel is one of the many exciting presentations at MobileTECH 2017. Further information on the MobileTECH 2017 programme, which runs in Rotorua on 22-23 March 2017, can be found on the event website, www.mobiletech.events.